Our school is named after St Martin of Tours. St Martin lived his life being kind and wanting to do good for others without wanting any reward. This is the story of St Martin who is often referred to as the ragged bishop. 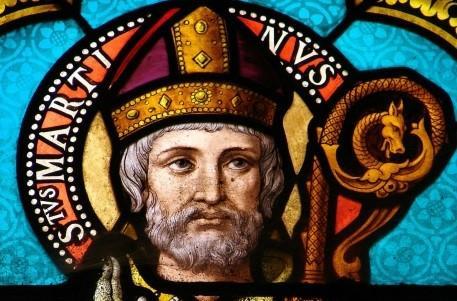 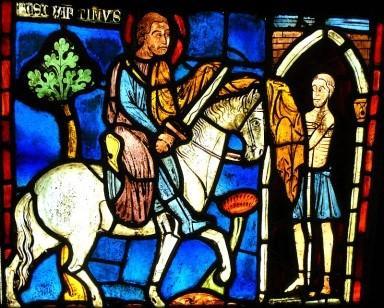 The man we know as Saint Martin of Tours, in France, was born around the year 316. He was the son of a man who served in the Roman Army. The rule in those days was that if your father had served in the army you had to join the army too. So at the age of just 15, Martin became a soldier, though he never liked it very much.

One good thing about being a soldier was that you were given a warm woollen cloak to wear in the cold weather. One of the most famous stories about Martin has to do with that cloak. He was wearing it one windy, cold day as he rode his horse into town. Martin really looked like a proud soldier in his uniform and cloak, his horse prancing along and his shining sword hanging from his belt.

As he rode along, he noticed a thin, sick-looking man shivering in the cold by the side of the road. The man was surely very poor, for his clothing was old and full of holes. He had nothing warm to keep out the cold.

Martin was sad to see that nobody was even noticing the man. Having no money with him, he stopped, pulled his sword out of his belt and cut his woollen cloak right in half. Leaning down from his horse, he gave half to the poor man. Then he wrapped himself in the other half, and went on his way to town.

Some people laughed at Martin as he rode by—he looked so strange with half a cloak! But that night something wonderful happened. As he was sleeping, Martin had a vision of Jesus Christ in heaven, surrounded by angels and wearing half of Martin’s cloak. Jesus said to the angels, “See how Martin has covered me with his cloak.”

When Martin heard these words, he thought of what Jesus had said when He was teaching the people. His words were, “If you do something to the least of these my brothers, you do it to Me.” He knew that he wanted to serve Jesus for the rest of his life.

Martin went to the ruler of the land—the Roman emperor. He said, “I have served you as a soldier, but it is not right for me to fight anymore. From now on I am a soldier of Christ.”

Once again, some people laughed at Martin. They said, “You’re just making excuses because you’re afraid to fight.” The emperor was angry at losing a soldier he could trust and depend on.

But Martin didn’t let the laughter bother him. He didn’t let the anger worry him. For the rest of his life, he served Our Lord Jesus Christ as a priest, then as a bishop. Any person in need could count on his help. He cared for prisoners and those who had been accused of crimes, and sometimes was able to save them from being put to death.

He taught many people about God, and the joy of God’s Kingdom. Traveling over many miles on foot, by boat, or riding on a donkey, he set up parishes and monasteries in Paris, Chartres, and other places.

Saint Martin’s feast day is November 11th. Because he cared so much for the poor and for people in trouble, he is often called Saint Martin the Merciful.

St Martin lived a long time ago and he followed the teachings of Jesus. His actions represent our three golden words: Respecting, Generous and Achieving.

He respected his father’s wishes to join the Roman Army, even though he didn’t really want to.

He was generous and kind towards others, especially the most poor.

He achieved his aim to serve God and Jesus.

Our three golden words in scripture:

2 Corinthians 9 v 7: Each of you should give what you have decided in your heart to give, not reluctantly or under compulsion, for God loves a cheerful giver.

Matthew 25 v 40: Truly I tell you, whatever you did for one of the least of these, you did for me.

Galatians 6 v 9 Let’s not get tired of doing what is good, for at the right time we will reap a harvest—if we do not give up.

We strive to create a school family in which our children are educated and inspired through a love and understanding of God, each other and our world. 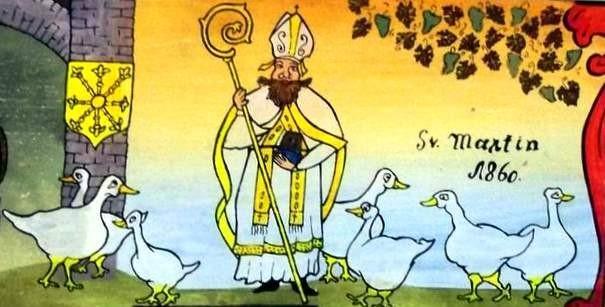 The geese helped ensure that St Martin did what God wanted him to do. In Norfolk we see lots of geese, especially when they spend their winter holidays with us. Seeing the geese reminds us to be respectful of other people and our environment, to be generous whenever we can and to always do our best to achieve our goals.
Top

Unfortunately not the ones with chocolate chips.

Some cookies are necessary in order to make this website function correctly. These are set by default and whilst you can block or delete them by changing your browser settings, some functionality such as being able to log in to the website will not work if you do this. The necessary cookies set on this website are as follows:

Cookies that are not necessary to make the website work, but which enable additional functionality, can also be set. By default these cookies are disabled, but you can choose to enable them below: